No technician? No problem: Africa RISING releases 35 vernacular DIY videos on maintenance of maize shelling machines for use by farmers in Ghana

It is estimated that smallholder farmers in northern Ghana face postharvest losses ranging between 30–50% of the yields obtained in each cropping cycle. While northern Ghana has a great potential to be a breadbasket region for the country, with almost all crops grown in the country capable of being cultivated there, this high level of postharvest loss cutting across the value chains of the two main cereal crops grown in the region – rice and maize – is problematic. Previous Africa RISING studies have indicated that quantitative postharvest losses of economic importance occur in the field (15%), during processing (13–20%), and storage (15–25%).

Over the past eight years, the Africa RISING project has been working to tackle the challenge of postharvest food losses faced by farmers at each of the three critical stages – field, processing and storage. In the field, the project team has been training farmers on the best practices for harvesting operations like winnowing, dehulling, drying and sorting. At the processing stage, the project has introduced farmers to the operation and maintenance of mechanized maize shelling machines in collaboration with organizations such as the GRATIS Foundation and PodMEDIA; while at the storage stage, the project has collaborated with partners to introduce farmers to hermetic storage to prevent damage by insect pests.

To enhance the gains made in the reduction of postharvest losses from these interventions, the Africa RISING project team has produced 35 short, vernacular do-it-yourself (DIY) videos that smallholder farmers can refer to for tips on maintaining their mechanized maize shelling machines. Produced in the five major local dialects spoken in northern Ghana – Gruni, Dagbani, Dagare,Wale and Kasim; the videos will be played for communal viewing and compressed in size and distributed through social media applications such as WhatsApp, whose usage within communities in the region is on the rise. 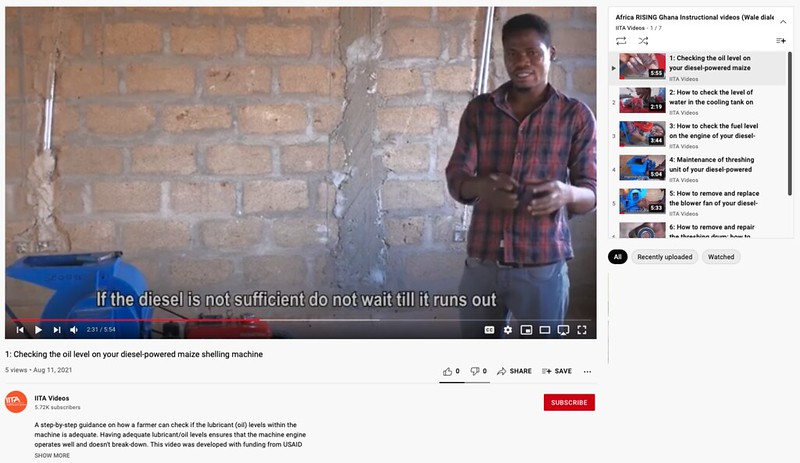 ‘One of the main challenges we noticed since the introduction of the maize shelling machines to farmers is the limited access to qualified technicians for quick repairs whenever there is a breakdown. The majority of the technicians are based in urban areas and are sometimes too busy therefore forcing the farmers to interrupt their shelling activities several times and in the process leading to even more postharvest losses,’ explains Africa RISING Project Agricultural Economist Bekele Kotu. ‘As a project, our approach to solving this challenge was first to offer practical training to 3-4 farmers (para-technicians) drawn from 21 farmers’ groups that we work within the region on how to carry out basic repair and maintenance for the maize shelling machines. And second, to develop these videos, which we believe will guide these para-technicians in their efforts to accomplish their responsibilities whenever the machines break down or require regular maintenance. We hope that this will help the farmer to avoid lengthy interruptions of maize shelling activities due to machine spoilage in a situation where professional technicians are inaccessible,’ adds Bekele.

The videos offer step by step guidance on maintenance and repair, covering topics such as:

Through the Africa RISING project, 18 small-scale diesel-powered maize shellers have been granted to farmers’ groups in the Northern, Upper East, and Upper West regions. The farmers’ groups have been formed voluntarily by the farmers with the facilitation of Africa RISING project staff. Each group has developed a constitution to govern members’ interactions regarding the management and use of the machines and every member has made cash contributions to establish the initial capital.

The role of ICT based extension services on dairy production in Kenya: A case of icow service

END_OF_DOCUMENT_TOKEN_TO_BE_REPLACED

mNutrition project: Improved nutrition for the poor as a result of behaviour change promoted by accessible mobile-based services delivered at scale through sustainable business models

This project aims to improve the nutritional status of more than three million people in Africa and South Asia, primarily women and children, by helping them to access nutrition-based agricultural and health information using mobile technology. ILRI is part of a consortium appointed as the global...

The Smallholder Dairy Project carried out research and development activities to support sustainable improvements to the livelihoods of poor Kenyans through their participation in the dairy sub-sector. The project was jointly implemented by the Ministry of Livestock and Fisheries Development, the...