More than 500 Maasai women and men gathered in song and dance to welcome Fiona Flintan, senior scientist at the International Livestock Research Institute (ILRI), and implementing partners from the Sustainable Rangeland Management Project (SRMP) at Engongwangere, a village in the Kiteto district, located in the semi-arid region of northeast Tanzania.

Although delayed by a year due to COVID-19 in 2020, this did not dampen the celebration of the successes of the ten-year project, which had been instrumental in securing the rights of local rangeland users to grazing areas, access to water and mobility, as well as resolving conflicts between land users. It is these same successes that are being documented in a film by Marco Buemi and Lodrick Mika, two filmmakers who were part of the visiting delegation.

One of the signature outcomes of the SRMP is the joint grazing land agreements secured by predominantly Maasai communities in the district through the Joint Village Land Use Planning (JVLUP) process of the project.

At the core of the process is the need and support for the sharing of rangeland resources across village boundaries. This is important not only to optimise the use of these resources in the dryland environments where many of the Maasai villages are located, but also to help strengthen the collective identity of the pastoralists and livestock keepers living on that land and consolidate their shared responsibility in managing and improving those resources.

Communities that have benefited from the ILRI-led Sustainable Rangeland Management Project are from Kiteto district, in the semi-arid northeast region of Tanzania. Photo Lodrick Mika/TNRF

This collective commitment is enshrined in the names given to the shared grazing land. The first, called, OLENGAPA, is derived from the names of the four villages–Olkitikiti, Lerug, Engongwangere and Ngapapa– which, altogether, covers more than 30,000 hectares of land. A second area is ALOLLE, another cluster of four villages, where 95,000 hectares of shared grazing land have been secured through the project. The agreements are formalized through the holding of Certificates of Customary Rights of Occupancy (CCROs).

Prior to the project, conflicts over land use were common, and encroachment of the grazing lands by farmers was high.

“The joint village land use planning and SRMP brought peace to the community and has given us greater security over our grazing lands,” said OLENGAPA chairman, Kilekeni Noongejek, in his remarks at the celebration. “The approach should be upscaled in other pastoral areas of Tanzania.”

“Her name is Bella, and I am told that she is getting very fat!” said Fiona, describing the heifer calf that she received as a gift from the chairman and village elders at the event.

A young calf is the ultimate gift one can receive from the Maasai. In their culture, cattle are a form of currency that symbolize wealth and are also valuable sources of livelihood and nutrition.

Other gifts were also shared with the visiting guests, including sheep that were given to officials from Tanzania’s Ministry of Livestock and Fisheries and the Kiteto district office, and traditional clothes and cultural items for attending members of the local pastoralist NGO, KINNAPA.

“These gifts reflect how this project has made a difference for the communities, which I have grown to consider as my extended family,” says Fiona. “Bella is a reminder that our collective achievements need to be nurtured and continued.”

Fiona and project partners are documenting the successes of the SRMP in order to support efforts to further upscale the JVLUP approach in the country.

“We decided to produce a film, rather than a written report, as an innovative and creative way to document project results whilst also raise awareness and make the case for land use planning in pastoralist areas,” said Fiona. “Through seeing and hearing real life examples, we can demonstrate just how impactful the joint village land use planning approach can be.”

The film is being produced in partnership with the Ministry of Livestock and Fisheries and the National Land Use Planning Commission. Lead filmmaker, Marco, is a photojournalist and sustainable development expert, who is collaborating with local filmmaker, Lodrick, from the Tanzania Natural Resource Forum (TNRF).

In addition to its local distribution in Tanzania, the film will contribute to overall efforts by ILRI to increase and strengthen the visibility of rangelands globally and publicly, in order to draw attention to their importance and need for protection and restoration. 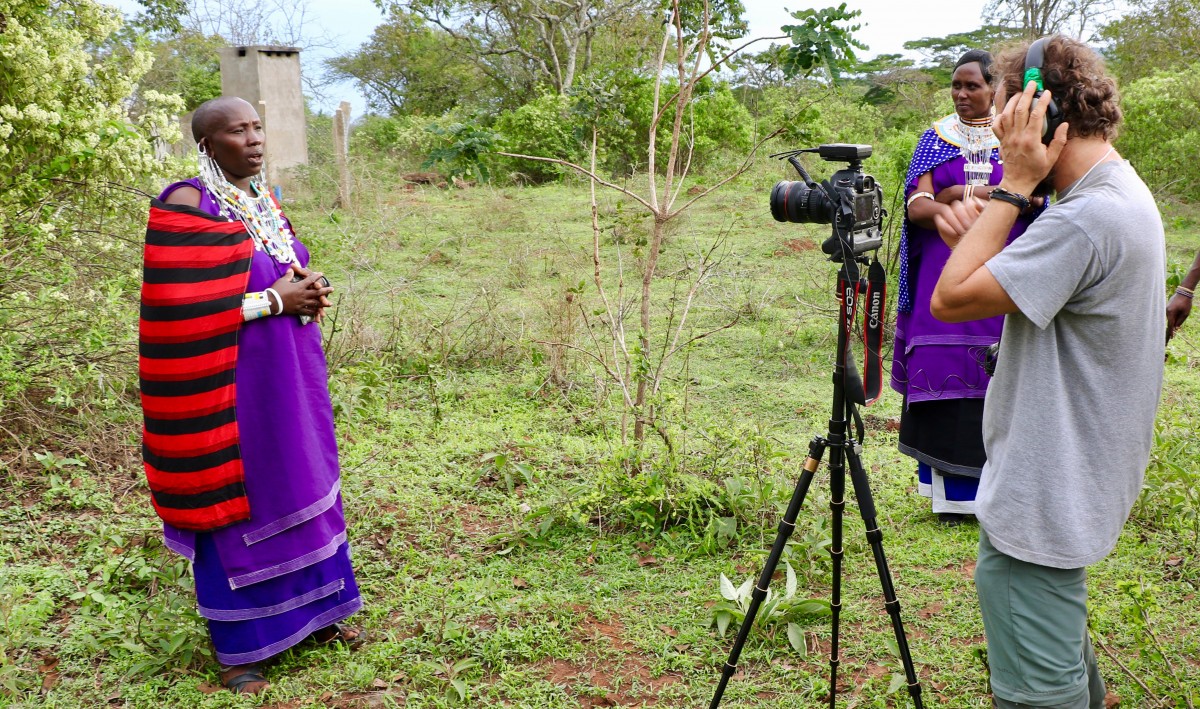 A pastoralist describes how her community has benefited under the Sustainable Rangeland Management Project in Kiteto District, Tanzania. Photo Lodrick Mika/TNRF

Fiona has left Bella in OLENGAPA, entrusting her care to the women from the Women’s Leadership Forum. The forum is another key achievement of the SRMP project, which has sought to emphasize the important role that women play as restorers and stewards of land. The forum continues to operate even after the close of the project, focusing on building the capacities for women to take up leadership roles in the community.

The Sustainable Rangeland Management Project was funded by IFAD (International Fund for Agricultural Development), Irish Aid and the Belgian Fund for Food Security (BFFS) together with in-kind contributions from implementing partners. Under its second phase, SRMP was implemented by ILRI, working with the government of Tanzania and local partner KINNAPA. The project contributed to the National Engagement Strategy (NES) led by the Tanzania Land Alliance (TALA), and the Rangelands Initiative of the International Land Coalition – a network of member organisations working for pro-poor sustainable development with land rights and good governance at its core.