From waste to wealth: the innovation turning cassava peels into a growing new industry

Growing up in rural Nigeria, around 250 km from Lagos, Adeleke Adegoke Ogunlade dreamed of becoming an agribusiness entrepreneur. Now, he's at the cutting edge of a brand-new industry, turning a polluting waste stream into valuable, nutritious livestock feed.

A few years ago, when he returned from a stint living in Australia, he decided to get into the cassava value-chain business. Nigeria is the world's largest cassava producer -- nearly 60 million tonnes are harvested each year, making up 20 percent of global production -- but still, supply cannot keep up with the country's domestic demand.  Unlike other crops, Ogunlade reasoned, he would never have problems getting hold of the raw material: "cassava is basically all around us in the southwest, in this part of Nigeria. You don't have the panic, the fear that it is not available."

He invested in a cassava processing plant, and started producing the staple West African food garri -- flour made from the tuberous roots of the cassava plant.  But there was a lot of competition in the industry, and Ogunlade started looking around for ways to add value.

To make garri, the cassava roots have to be peeled. Traditionally, the peels have been dumped in huge heaps and burned, or allowed to rot -- turning them into an environmental hazard, as toxic compounds in the raw peels leached into waterways.

Some producers attempted to dry the peels in the open air for use as a livestock feed, but this process takes 3-5 days, and the peels are susceptible to contamination by fungal toxins, especially in the wet season.

In 2015, Acho Okike and other researchers at the International Livestock Research Institute (ILRI) and the International Institute for Tropical Agriculture (IITA) developed a technique for processing wet cassava peels into a high-quality, safe, nutritious livestock feed within eight hours -- transforming three tonnes of wet peel into one tonne of dried cassava peel mash.

The key innovation was to grate the peels, and then squash them in a hydraulic press to rapidly remove the liquid, says Tunde Amole, an ILRI researcher in Nigeria.

The process produces a kind of 'cassava peel cake', which is then grated again, forming particles of uniform size, which dry out in a matter of hours. The resulting product -- called "High Quality Cassava Peels" or HQCP -- has just 10-12 percent moisture content and keeps for six months.

The high-fibre coarser particles can be separated out for pig and ruminant feed, while the higher-protein finer particles can be given to poultry. A series of trials conducted by ILRI and other Nigerian researchers found that HQCP could be used to replace significant quantities of maize in the diet of weaned and growing pigs without any impact on their health or weight gain.

Ogunlade attended one of the training sessions ILRI held on the new technique, and now runs one of several dozen cassava-peel factories across Nigeria. He sells the dried peel to feed wholesalers, who sell it on to livestock producers like John Olateru. 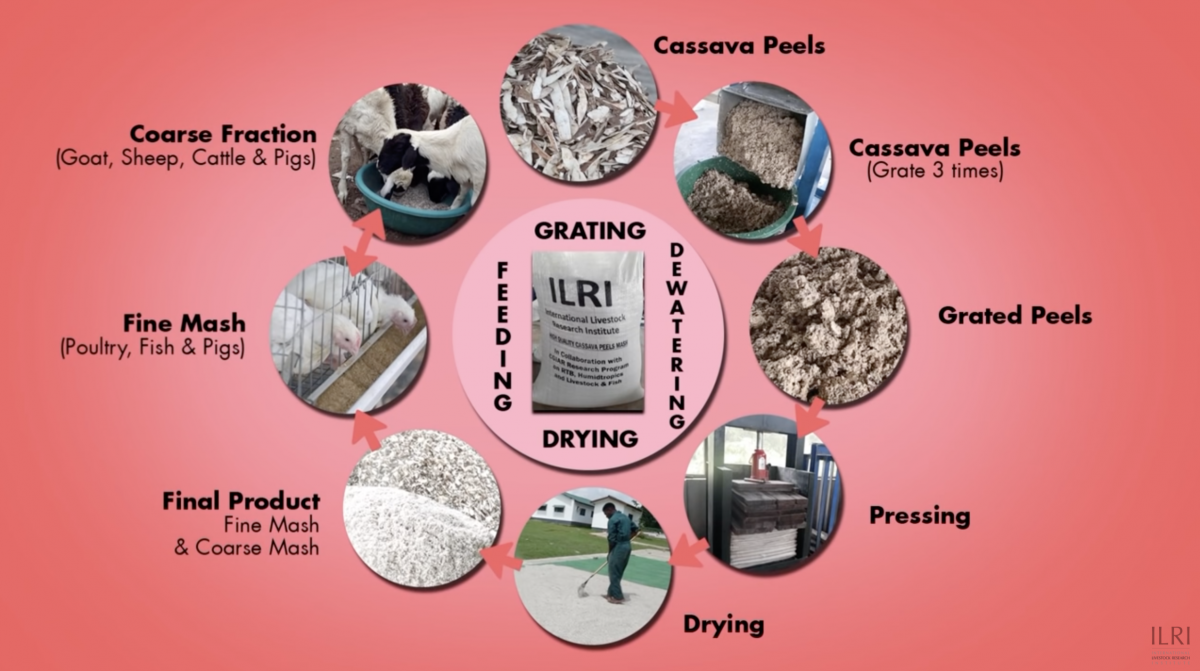 Olateru is a poultry farmer in Ibadan, where he has around 50,000 chickens for eggs and human consumption. When he first heard about using cassava peel for livestock feed, he was skeptical -- he had tried using feed derived from cassava in the past, and found it had very low nutritional content. But he sent some HQCP to a few laboratories for independent testing, and was impressed with the results. Then he tried mixing it 50/50 with maize and gave it to the chickens. They grew so well he now feeds some of them entirely on HQCP, and the cost is about half that of maize. If he could, he would use only cassava peels -- further bringing down the cost of production -- but he can't source enough, as demand is now far greater than supply.

For Ogunlade, that makes HQCP a lucrative business.  "I'm very happy I entered into it." He has largely stopped making garri himself, and now buys the peels directly from nearby garri producers -- peels are where the profits are now, he says.

Ogunlade is working with ILRI to offer free training in cassava peel processing for unemployed young people. "This is really a new area of creating jobs, particularly young boys and girls aged 20-25," he says. The majority of those working in the new factories are women, leading to increased incomes and livelihood opportunities.

The simple innovation has had cascading benefits for Nigeria, says Amole, who now leads the training, scaling and experimental trials of HQCP for ILRI.

"It's a form of circular economy," he says. "Turning waste to wealth, turning trash to cash. I'm excited about that."

In Ogunlade's local area, the polluting heaps of cassava peels are almost completely gone. "The heaps of the rotting peels could be as big as a house. They would smoke and burn or they would smell during the rainy period, and if you passed by any garri industry you would feel sorry for the air pollution," Ogunlade says. "But you can't find that any more. Those heaps are gone, they are using that space for something good now."

Cassava peels also have the potential to make livestock production cheaper, making protein more accessible for the country's poorest people.  Producing HQCP costs around 60-70 percent of the cost of other feeds, Amole says. That's especially important at the moment, as the price of the common staple maize has nearly doubled over the last year, a result of Covid-19 disruptions and terrorism in Nigeria's maize-producing areas in the northwest of the country. Though they don't quite reach the nutritional quality of maize, cassava peels are a cheaper, safe, consistently-available alternative, Amole says. 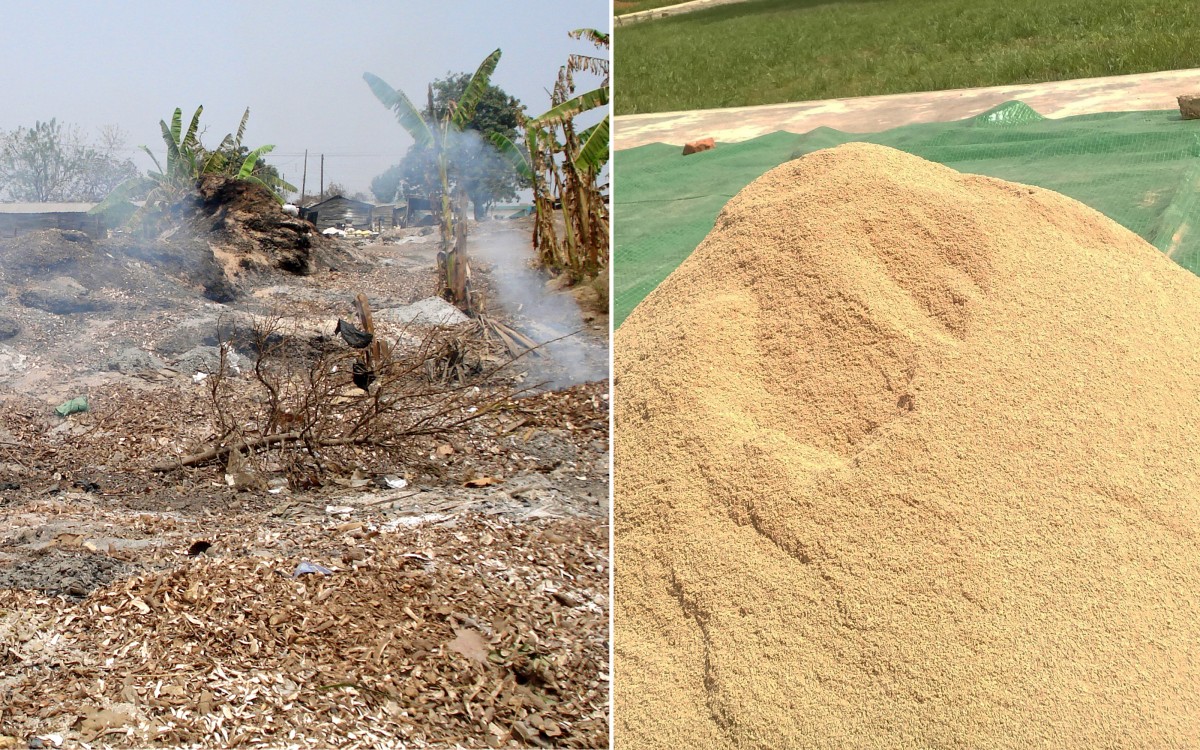 Cassava peels left to rot (left). Processing them into usable, nutritious peel for livestock (right) are a sustainable and profitable means to reduce the environmental hazards of rotting cassava peels. Photos by I. Okike/ILRI/IITA

The growing interest in HQCP by entrepreneurs like Ogunlade and livestock producers like Olateru shows just how useful the innovation is, says ILRI's Alan Duncan, who oversaw the project. "That's our dream -- if the technology attracts the interest of the private sector, and then they take it up and run with it, then for us that's a great outcome. That's the only way it can go to scale."

He hopes to see the technology adopted by other countries -- elsewhere in Africa, and Asia and Latin America too.  "It's relevant wherever cassava is grown, across the humid topics -- it's in its infancy now, but it could really become quite a big deal."

Cassava-growing powerhouses Ghana, Liberia, and Senegal are already interested, Amole says, but Covid-19 travel restrictions have also slowed progress -- it's hard to train people to use mechanical gear online. "I'm looking forward to many donors to scale this up, to see how this can fly."